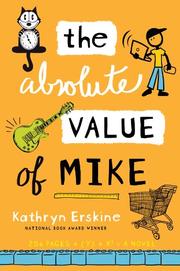 THE ABSOLUTE VALUE OF MIKE

Sent to stay with octogenarian relatives for the summer, 14-year-old Mike ends up coordinating a community drive to raise $40,000 for the adoption of a Romanian orphan. He’ll never be his dad's kind of engineer, but he learns he’s great at human engineering.

Mike’s math learning disability is matched by his widower father's lack of social competence; the Giant Genius can’t even reliably remember his son’s name. Like many of the folks the boy comes to know in Do Over, Penn.—his great-uncle Poppy silent in his chair, the multiply pierced-and-tattooed Gladys from the bank and “a homeless guy” who calls himself Past—Mike feels like a failure. But in spite of his own lack of confidence, he provides the kick start they need to cope with their losses and contribute to the campaign. Using the Internet (especially YouTube), Mike makes use of town talents and his own webpage design skills and entrepreneurial imagination. Math-definition chapter headings (Compatible Numbers, Zero Property, Tessellations) turn out to apply well to human actions in this well-paced, first-person narrative. Erskine described Asperger’s syndrome from the inside in Mockingbird (2010). Here, it’s a likely cause for the rift between father and son touchingly mended at the novel's cinematic conclusion.

A satisfying story of family, friendship and small-town cooperation in a 21st-century world.