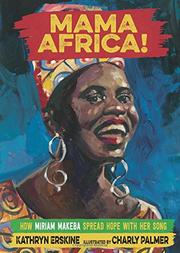 How Miriam Makeba Spread Hope with Her Song

Buoyed by the work of Nelson Mandela and the music of Billie Holiday and Ella Fitzgerald, Miriam sang to make black South Africans free.

Born in 1932 near Johannesburg, Miriam Makeba “sang as soon as she could talk.” Growing up in apartheid-era South Africa, she rebelled against unjust laws restricting where blacks could go and what they could do, and she fought that racism with her songs, even singing subversively in languages the government officials could not understand. Eventually, Miriam illegally left South Africa to sing internationally and tell the world that blacks were dying because of apartheid. Throughout the book, white rectangular text boxes convey the discriminatory actions of the baases (white ruling class), while black-backgrounded text boxes present Makeba’s words and efforts to fight racism—making white negative and black positive. Palmer’s densely illustrated, painterly scenes give readers a strong sense of the culture and beauty of South Africa. His images of people, however, often include just enough detail to reveal their emotions. The backmatter offers a single timeline of Makeba’s life and the U.S. civil rights movement, a glossary, and copious research resources. Erskine, a white woman who, as a child, lived in South Africa during apartheid, includes photos of her young self working for social justice.