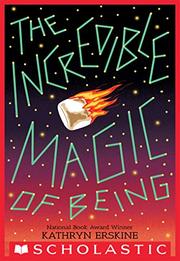 THE INCREDIBLE MAGIC OF BEING

Nine-year-old Julian is gifted both emotionally and intellectually, but these assets come at a sometimes-distressing cost.

He, his 14-year-old sister, Pookie, and his two moms, Mom and Joan, all apparently white, have just moved to rural Maine to open a bed and breakfast—and also to get Julian, who has a heart condition, out of a difficult school environment. He’s tormented by anxieties, nightmares, Mom’s severe overprotectiveness (somewhat offset by Joan’s more relaxed parenting style), and especially by their deteriorating relationship with Pookie, who seems always to be angry these days. He manages to cope by immersing himself in his passion, astronomy. After a neighbor threatens to sue the family over an addition to their new house, Julian befriends the elderly, grieving white man, bereft after his wife’s death. In return, “Mr. X” decides to help Julian overcome his paralyzing fear of swimming. Julian gently narrates this immersive tale, Erskine employing Julian's “uni-sensor” abilities (a quasi-magical, extrasensory connection with others) to reveal richly nuanced characters. It’s only near the conclusion that he discloses just how extraordinary his bond with others can be. Julian’s Facts and Random Thoughts (“FARTS,” natch), represented as sidebars in his handwriting, add insight into the boy’s psyche but also provide fascinating tidbits of trivia.

A timeless and affecting, slightly paranormal exploration of familial attachments.