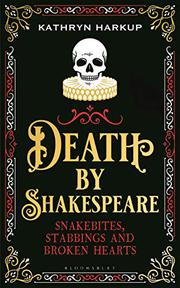 Chemist, journalist, and blogger Harkup examines the many ways Shakespeare chose to kill off his characters—something that happens in most of his plays.

“Shakespeare’s tragedies and histories,” writes the author, “are littered with the bodies of characters who got in the way of someone’s ambition or were cut down because of some perceived insult.” Readers will need a strong stomach to get through many of Harkup’s descriptions: of the process of hanging, drawing, and quartering, for example, where convicted individuals were cut down from the scaffold before death “and were still able to watch as their entrails and heart were drawn out of their abdomen and burnt on a fire in front of them.” Or consider the visceral effects of various poisons: Cyanide, for one, causes “massive cell death,” resulting in “headache, dizziness and convulsions, as well as vomiting and rapid pulse, before collapse and death.” Cleopatra’s snake bite was not likely to have been “soft as air,” as Shakespeare described it, since Egyptian cobra bites are very painful, especially on the breast, which is where Cleopatra placed the snake. Most of Shakespeare’s victims die in sword fights; Harkup notes that his actors were expected to be skilled at swordsmanship, and many trained at fencing schools. With battles an important feature in Shakespeare’s histories, it’s no wonder that death by sword recurred, but there were other causes, too, including smothering, beheading, drowning, and suicide. In an appendix, the author provides a chart listing all of the plays’ victims and the means by which they died. A few, like Othello, took their own lives out of guilt; others, like Lady Montague in Romeo and Juliet, died of grief. Besides investigating the plays, Harkup gives historical background about Elizabethan perils, such as executions, plague, syphilis, death in childbirth, tuberculosis, and infected wounds. She speculates about what Shakespeare knew about causes of death; like other contemporary playwrights, he did know that audiences loved violence.

A brisk, informative, and startling look at Shakespeare.