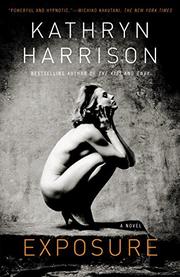 A stunning second novel from Harrison (Thicker Than Water, 1991) details the fragmented and increasingly self-destructive life of a woman whose every secret moment has been played before a camera's eye. It is the summer of '92, and N.Y.C.'s Museum of Modern Art has moved up its retrospective of the photographic works of the late Edgar Rogers in an effort to halt the rash of protests, bomb threats, and the one self-immolation that the planned exhibit has already inspired. The protestors claim that Rogers's photographs, which record his prepubescent daughter Ann in dozens of acts of self-mutilation, masturbation, intercourse, and, most frequently and perhaps most disturbing, in death-like trances caused by her diabetes, are misogynistic and obscene. The museum curators argue that they are works of art--an assertion apparently supported by Ann herself as, now grown up, she races about town videotaping society weddings for a living, sniffing crystal meth in bathrooms, and diving into Bergdorf Goodman's for compulsive shoplifting sprees. Ann knows, dimly, that her secret life as a drug addict, thief, and liar threatens her career, her sanity, and her otherwise happy marriage--but as the retrospective approaches, the need to hide from memories of her cold, all-seeing father, who seemed able to seize and steal her every private moment (and with whom she suspects she collaborated in an attempt to win his love), keeps her running at manic speed. On opening night, Ann learns that not only has her shameful childhood been laid bare for the public to judge, but that her husband and attorney have, out of well-meaning concern, conspired to have her watched--paying for her thefts, witnessing her drug abuse, and otherwise brutally invading her privacy yet again. The discovery sends Ann over the edge--taking the reader with her into a breathless urban nightmare not easy to forget. Stark, brilliant, and original work.