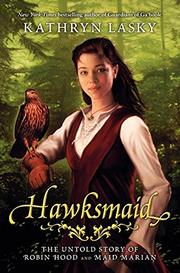 The Untold Story of Robin Hood and Maid Marian

Veteran Lasky combines the Robin Hood/Maid Marian story with falconry. Matty and Fynn are childhood friends, playing together when Matty is not being taught by her father, Lord William, to work with hawks. She begins to understand hawk language, getting inside their minds as she trains them. When Prince John and his allies murder Matty’s mother for her jewels, her father pines away. Loyal to King Richard, Matty, Fynn and a host of local lads work to keep their families fed and Prince John hassled—and then to raise the funds to ransom Richard when he is captured. Flash-forward: Matty has metamorphosed into Marian and Fynn into Robin Hood, paving the way for more derring-do. Matty/Marian’s uncanny communication with her hawks takes the novel into the realm of fantasy as she slips into the mind of bird after bird to effect her own rescue, bring ransom to Eleanor of Aquitaine and declare her love for Fynn/Robin. Each chapter begins with a bit of hawk lore (not sourced). It doesn’t bear up under scrutiny, but it’s fun to read. (author’s note) (Historical fantasy. 9-12)