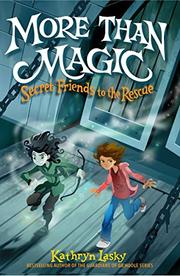 Ryder has just turned 11, the same age as the cartoon character created by her years-dead mother, and learns that she can enter the cartoon world—and possibly save it.

Ryder’s mom, a brilliant animator, based her main character, Rory, on Ryder. Rory is a swashbuckling girl adventurer in an extremely popular cartoon series, soon to be a film. Now Ryder’s dad is interested in nasty Bernice, who wants to make the film Rory into a sappy princess with a vapid magic wand instead of a scrappy slingshot. Scandalized, Ryder doesn’t know what to do until Rory herself steps out of the TV and invites Ryder into her world, Ecalpon (“No Place”). There they team up with Ryder’s nerdy Jewish friend, Eli, to change the movie back to the original concept. Ryder, Rory, and Eli enlist the aid of Connie, Bernice’s one likable daughter. Inhabiting the wireframe layer of the animation, the children learn they can drag artwork from the trash to re-create the original drawings. But can they win the race against time to save Rory and the film? Alternating narration among Ryder, Rory, and minor characters in Ecalpon, Lasky creates her own absorbing magical world, neatly folding it around a story of friendship. The cast is not notably diverse; with the possible exception of Connie, they all seem to be white.

Both the concept and the well-paced suspense will appeal.