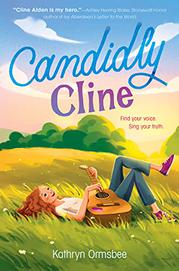 A 13-year-old queer girl dreams of being a musician in this coming-of-age story.

Cline Louise Alden, who was named after Patsy Cline, lives in Paris, Kentucky, with her waitress Mama, who believes in practicality, and Gram, who encourages her love of music, particularly older songs from women country singers. When Cline learns of an upcoming singer/songwriter workshop in Lexington, she’s determined to go even if she has to keep it a secret from Mama and find a way to come up with the $300 fee. The workshop is both inspiring and intimidating, while Sylvie, Cline’s assigned partner who prefers rock music, gives Cline all sorts of nervous and excited feelings. The story skillfully tackles varying Christian beliefs about sexuality, Gram’s Alzheimer’s, the family’s financial struggles, and shifting friendships. While the plot is propelled by Cline’s musical journey, it’s the captivating character of Cline herself that makes the book shine, although many secondary characters are notable in their own rights. Cline’s confident, candid, and immensely endearing narrative forms the heartbeat of the book as she learns to be both vulnerable and strong. Readers with passion and big dreams will be able to relate. It’s refreshing that Cline has no internal struggle about her sexuality; her concerns are about how and when to share her identity with others. Cline is White; Sylvie’s mom is from Mexico and her father is White and American, and side characters bring additional diversity to the story.

Destined for the spotlight.