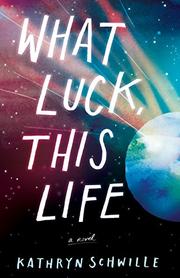 WHAT LUCK, THIS LIFE

A small town’s residents cope with their lives and an American tragedy.

A scream comes across the sky, and there’s nothing to compare to it in Schwille’s quietly contemplative and affecting first novel. On Feb. 1, 2003, the Space Shuttle Columbia exploded while re-entering the Earth's atmosphere, and debris fell into the water. Schwille imagines that debris fell onto Kiser, a “dinky, third-fiddle” east Texas town near Louisiana. She introduces us to a wide array of locals and their simple lives, now interrupted by search and rescue operations. Schwille’s narrative is told from widely different points of view and employs subtle time shifts going back and forth across years. “Time,” to quote from her Italo Calvino epigraph, “is a catastrophe, perpetual and irreversible.” Kiser suffers from drought, unemployment, multiple divorces, damaged soldiers returning from war, meth labs, anti-gay sentiments, domestic violence, and racism. Wes MacFarland tells us Kiser “wasn’t one of those storybook places.” He’s a struggling, tormented, gay tree-service foreman married to a woman named Holly. Their young, troubled son, Frankie, “heard the shuttle come apart” and came across an “orange space suit wedged in the crook of a tall tree...an astronaut’s torso inside it.” Wes will abandon Kiser, moving to Houston to be with his partner, Ben. Holly will divorce him and marry Pastor Will Simpson, who felt she “had brushed against the devil’s ways.” “Diabetic, Gandhi-thin” Plato Winchester, a “modern-day Davy Crockett,” found “bits of metal, pieces of foam, something he said looked like glass.” A “shoe-less foot, missing one big toe” is found beside Junior Pierce’s mailbox. Gabe Dixon, a poor African-American man, finds a female hand with a ring on it. “The people of Kiser had spread their arms around [this] disaster and accepted the great burden of its grief.”

"From a wound, beauty rises” in this modern-day Winesburg, Ohio.