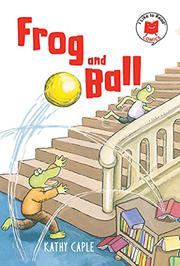 Never underestimate the chaotic fun that magic and an angry bouncing ball can create.

When Frog goes to the library, he borrows a book on magic. He then heads to a nearby park to read up on the skills necessary to becoming “a great magician.” Suddenly, a deflated yellow ball lands with a “Thud!” at his feet. Although he flexes his new magician muscles, Frog’s spells fall as flat as the ball. But when Frog shouts “Phooey!” and kicks the ball away, it inflates to become a big, angry ball. The ball begins to chase Frog, so he seeks shelter in the library—and Frog and ball turn the library’s usual calm into chaos. The cartoon chase crescendos. The ball bounces into the middle of a game of chess, interrupts a puppet show, and crashes into walls and bookcases. Staying just one bounce ahead, Frog runs, hides, grabs a ride on a book cart, and scatters books and papers as he slides across the library furniture before an alligator patron catches the ball and kicks it out the library door. But that’s not the end of the ball….Caple’s tidy panels and pastel-hued cartoons make a surprisingly effective setting for the slapstick, which should have young readers giggling. Simple sentences—often just subject and verb—with lots of repetition propel the action. Frog’s nonsense-word spells (“Poof Wiffle, Bop Bip!”) are both funny and excellent practice in phonetics. (This book was reviewed digitally.)