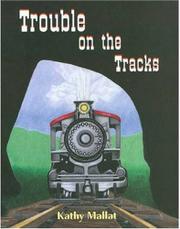 TROUBLE ON THE TRACKS

Mallat (Brave Bear, 1999) plays with the viewer’s perception of scale in this brief but eventful train ride. “Next stop, Black Paw Crossing!” calls the conductor, and the train chugs off, blowing its whistle as it passes greenery and waving villagers. Suddenly, two huge eyes (one on each of double pages) in an inky black face signal “Trouble on the tracks!” Trouble the cat, that is, who saunters away through the suddenly small trees and houses, leaving the derailed train, now seen to be a model, for its full-sized young “engineer” to put to rights. In magic marker and colored-pencil illustrations, Mallat gives her figurines inconspicuous flat bases from the beginning, a clue that is likely to elude children and adults alike at first pass, despite a heavy hint in the flap copy. Fans of Van Allsburg’s Bad Day at Riverbend (1995) or David Macaulay’s classic Black and White (1990), as well as young trainiacs, will want repeated rides. (Picture book. 4-6)