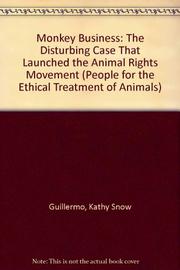  Where does an 800-pound gorilla sit? As the joke goes, anywhere he wants--which, judging by animal-rights activist Guillermo's morally inflamed report, won't include labs like Maryland's Institute for Behavorial Research (IBR), the primate research center whose abuse of its monkeys kicked off the animal- rights movement in the US. In 1991, Guillermo relates, 22-year-old Alex Pacheco-- cofounder of People for the Ethical Treatment of Animals (PETA)- -took a job at IBR as part of his undercover investigation into animal-research facilities. What he found at the lab--which was researching sensation and motor function in 17 intentionally maimed macaque monkeys--appalled him: ``The stench was unbelievable,'' writes Guillermo. ``Oozing untreated wounds covered the limbs and torsos...Filth encrusted the wire walls and floors of the cages....'' Pacheco proceeded to gather photographic and paper evidence that he finally presented to the state attorney's office and local county cops, who raided IBR and removed the monkeys. Days later, animal-cruelty charges--the first ever brought against an animal experimenter--were lodged against IBR's director, who eventually was found guilty on one count. That verdict, however, and indeed PETA's struggle with IBR, were subsumed in a larger battle as the National Institutes of Health, which funded IBR and viewed PETA as a threat to free scientific inquiry, threw its considerable weight against the animal-rights group. Guillermo, PETA's ``lifestyles director,'' makes no bones about her sympathies (``NIH was willing to sell out the animals in order to remain at the top of the animal experimentation heap''), but she does an orderly if plodding job of chronicling the PETA-NIH battle, which came to involve national media, Congressmen, and celebrities, and which goes on today. A one-sided, rather stiff telling of a tale that--as a paradigm of grass-roots activism--has needed to be told: Now, if only a Roger Caras or a Cleveland Amory would tell it again, with style. (Photographs--not seen)