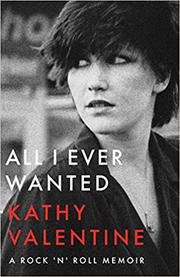 ALL I EVER WANTED

The former bassist for the Go-Go’s chronicles her life before and after stardom.

In this surprisingly revealing memoir, Valentine recalls her childhood in Austin, Texas, raised by a single English expat mother who treated her like one of her druggy pals. She was an early experimenter with drugs and sex, and at age 12, she had to travel to California to have an abortion. A televised 1973 performance by Suzi Quatro inspired Valentine to dream of creating “a kickass band with a gang of like-minded girls and claim the life I wanted for myself.” In 1980, after gigs with several smaller bands and a few years playing guitar, Valentine met Charlotte Caffey, who founded the Go-Go’s in 1978, and she soon became the band’s replacement bassist. Fueled by a heady combination of cocaine and steely determination, Valentine jumped right in to play a series of sold-out early shows. The author draws from impeccably archived personal journals, band itineraries, and Filofax calendars to recall her time with the band from its inception to peak popularity. Her whirlwind path to fame was also littered with dysfunction, especially her drinking and rampant drug use, which coincided with skyrocketing record sales. A crushing band breakup in 1985—fueled by a “deep disconnect between the way we saw ourselves and the way we were presented to the public”—was as brutally humbling as her time in recovery. Valentine doesn’t skimp on the details of both the raucous partying and the many mistakes and failings that chastened her as a woman and a musician. Her candid narration is confident and consistently infused with personality, and a generous section of photographs illustrates her chronology. Despite the Go-Go’s’ rough edges and ups and downs, Valentine, now 61, acknowledges their unique all-female presence in rock history, and she concludes with updates on reunion tours and hope for the future. One of Kirkus and Rolling Stone’s Best Music Books of 2020.