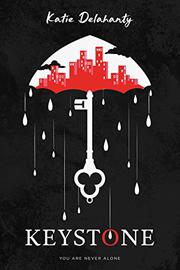 A former social media star rebels against the culture that made her in this dystopian YA novel from Delahanty (Believe, 2016, etc.).

Your social media reputation is everything when this book begins in the year it identifies as “20X5.” People literally invest their money in you on the Social Stock Exchange, and if you fall too far in the Index you might as well be dead. Ella Karman was destined to be an Influencer. The daughter of a Hollywood power couple, she debuted on the Stock Exchange at its highest price ever. Ella doesn’t enjoy the two-faced life of an Influencer, however, and after she is betrayed by her best friend, Deena, Ella decides to walk away from the whole thing. She fakes her own death at her 17th birthday party and, under the new name Elisha DeWitt, joins the Disconnects: rebels who live off the grid and eschew digital technology. She enrolls at Keystone, the Disconnect school for thieves who steal analog history records before they become reappropriated and distorted by corporations, and a master thief tells her: “Tape recordings, printed books, films, photographs—proof of history—are decaying and becoming scarce. Digital information is easy to tamper with, and there are forces at work that want current society to reflect their version of the past.” For her Initiation Heist, Ella/Elisha will have to return to the world of Influencers—along with Disconnect hunk Garrett—to prove that she really has become a different person. Delahanty’s prose is suspenseful and lean, and she skillfully reveals the layers of Ella’s emotional landscape: “Up until that moment, I wasn’t sure what I was going to do. Disconnecting seemed like an exciting fantasy—a way to stick it to my parents—but deep down I didn’t think I’d go through with it. There was no way I was brave enough to give up everything I knew and start over in a strange place.” The characters and their relationships are sometimes stunted in a way that is common in YA fiction, but the book makes up for its familiar flourishes with its imaginative exploration of “Influencer” culture. Young readers will enjoy the flirty teen spycraft fused with a thoughtful critique of the way social media now shapes the teenage experience.

An inventive take on dystopian YA that pits the analog against the digital.