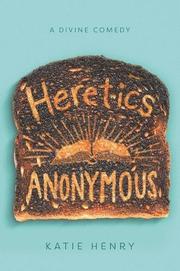 Teen angst and religious reflection cross paths in this insightful tale of self-discovery.

This engrossing bildungsroman centers on the travails of white, first-person narrator Michael Ausman. Reeling from his family’s frequent moves, and now forced to change schools less than two months into 11th grade, Michael is resentful at being at the mercy of his father’s job and worrying about how he, an atheist, will fit in at St. Clare’s, the best private—and Catholic—school in town. Luckily, Michael soon falls in with others bucking the St. Clare’s norm: Lucy, a devout Colombian-American Catholic bent on reforming the church; Avi, a gay, semi-observant Jew; Eden, a Celtic Reconstructionist Polytheist with Irish heritage; and Max, a Korean-American Unitarian. Together this group of iconoclasts forms “Heretics Anonymous,” a deliciously secret society united in the belief, “That all people, regardless of what they worship, who they love, and what they think / Have a right to exist, and a right to be heard.” The hypocrisy-busting acts of rebellion the group engages in range from hilariously annotating the school’s sex-ed DVD to circulating an alternative school paper challenging the dress code and exposing the firing of a popular teacher. But when Michael goes rogue and acts alone, his entire world is threatened.