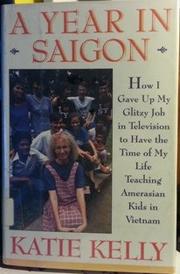 A YEAR IN SAIGON

An affecting account of a year working with Amerasian children in Saigon, by the former WNBC (New York) critic and Today Show regular. Throughout, Kelly reminds us of how good she's had it: a picture-book childhood in Nebraska, a high-profile career, and plenty of money. ``I loved every minute of it,'' she says frequently. But by the late 1980's it had all begun to ring hollow, and in 1988 she visited Vietnam to break with her success and to find a self not quite so high-powered. She resolved to return as an English teacher for children of Vietnamese mothers and American fathers, who number an astounding 30,000. She was met with cold resistance by Vietnamese functionaries, but finally taught courses at the Amerasian Transit Center, and, following that, in restaurants and parks. What might have seemed do-gooderish or at least ill-advised turned out well: The children were hungry, in poor health, and often ostracized, so they sought Kelly out. Her portraits of them here are deft and touching. There's Raymond, a black Amerasian who speaks flawless Midwestern since he was raised on American bases; and there's Kim, 18 and beautiful, who had one letter from her father, but never another. Kelly may or may not be a fine teacher, but she fed every hungry child she met and upon her return to New York lobbied ardently to bring them to America. She presently sponsors several Vietnamese children herself. Often giddy, but beneath the gloss there's an excellent reporter who offers an unassuming, detailed look at today's Vietnam, and at the persecution by neglect of the children we left behind. (Eight pages of b&w photographs—not seen.)