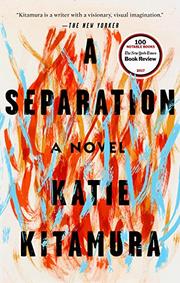 Dread and lassitude twist into a spare and stunning portrait of a marital estrangement.

At the end of this unsettling psychological novel, the narrator suggests that “perhaps wife and husband and marriage itself are only words that conceal much more unstable realities, more turbulent than can be contained in a handful of syllables, or any amount of writing.” Kitamura’s third work of fiction builds into a hypnotic meditation on infidelity and the unknowability of one’s spouse. In precise and muted prose, the entire story unspools in the coolly observant mind of a young woman, a translator. She is estranged from Christopher Wallace, her “handsome and wealthy” husband of five years. He is a relentless adulterer; the narrator herself is now living with another man. The novel begins with a phone call from Isabella, a hostile and unpleasant mother-in-law, petulant that she can’t reach her only son and ignorant of the separation. Christopher has decamped to rural Greece, and Isabella insists her daughter-in-law leave England to go after him. Thinking it time to ask for a divorce, she agrees. In the remote fishing village of Gerolimenas, there are grim portents: stray dogs, high unemployment, a landscape charred from a season of wildfires, and the hostility of a hotel receptionist who appears to have slept with Christopher. Each of 13 taut chapters turns the screw; at the beginning of the seventh there is a murder. Kitamura leaves it unsolved. Instead of delivering a whodunit, the author plucks a bouquet of unforeseen but psychologically piercing consequences. The narrator thinks, “One of the problems of happiness—and I’d been very happy, when Christopher and I were first engaged—is that it makes you both smug and unimaginative.” As this harrowing story ends, her life is diminished and her imagination is cruelly awake.

A minutely observed novel of infidelity unsettles its characters and readers.