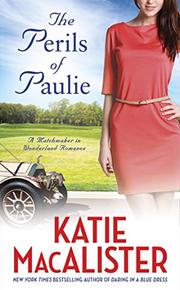 THE PERILS OF PAULIE

When a feisty but sheltered heiress and a stifled Englishman team up on an epic around-the-world race, it gets more than just their motors running.

Paulina Rostakova has lived under her father's firm but benevolent thumb for almost 30 years after an attempted kidnapping when she was 6. Paulie loves her dad but is frustrated by his interference in her life. When her stepmother suggests she take part in a reality show inspired by The Great Race, Paulie is excited about embarking on an adventure worthy of her hero, Nellie Bly. It's a chance for freedom as well as a once-in-a-lifetime opportunity to dress up in period clothes and drive a vintage car. Meanwhile, Dixon Ainslie has been withering away managing his brother's estate and recovering from the death of his fiancee. An adventure might be just the thing to help him put his life into high gear. Dixon and Paulie are both awkward, and their meet-cute is painfully so. But after being thrown together by circumstance, their attraction is clear. Once the race is underway, they begin secretly hooking up off camera. Unfortunately, a rival team is picking off contestants one by one. After their teammates are sidelined, the producers ask Dixon and Paulie to pretend to be in love and get married in order to keep the competition on track. A series of high jinks ensue, and the two encounter a hitchhiking Star Wars stormtrooper, a torrential downpour, a brief kidnapping by the worst thugs ever, and more. The sex is there, though it’s a little flat. If that's a deterrent for some readers, they may be won back by the zany antics and funny dialogue. The shifting perspectives—the novel is told through journal entries and text conversations (with hilarious autocorrects)—add new and refreshing elements to the story as well.

A sweet if occasionally silly adventure.