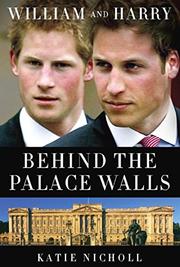 In her debut, Daily Mail on Sunday royal correspondent Nicholl zooms in on House of Windsor Princes William and Harry.

Beginning with the birth of the elder William in 1982, the author covers all the major events of the princes’ lives up to the present. She mostly colors in their childhood with the idiosyncrasies of their mother, the late Diana: her quest to deviate from royal tradition, giving birth in a hospital and hiring young nannies, and her eschewing her sovereign kin, preferring to shop, watch soaps and gab on the telephone. The media’s chronicling of the unhappiness between Diana and Charles and Diana’s tragic demise comprise the drama of the princes’ formative years. The ability of classmates to follow their family saga compounded the princes’ suffering, especially William’s. Though their bodyguards sat at the back of the classroom or on the sidelines of the football field, the princes mostly fit in at school like anyone else. Nicholl describes William as the scholar and Harry as the prankster, but she extols them both as lushly romantic figures, mentioning numerous heiresses who caught their eye, including William and Harry’s relationships with long-term girlfriends, Kate Middleton and Chelsy Davy, respectively. Nicholl unearths little about key friendships, and the only mentors she names are father, Prince Charles, and grandparents, Queen Elizabeth II and Prince Philip. Adulthood brings boozing and clubbing amid harsh military training, since both princes joined the armed forces in hopes of reaching the front lines; Harry helped thwart two attacks in Afghanistan. With tabloid relish, Nicholl cuts from military feats to public blunders that incited obloquy: William flying a service jet to visit his girlfriend and Harry donning a Nazi costume at a birthday party. The author finishes on a high note, commending the princes’ public service and speculating on when William will propose to Middleton.

Superficial and indulgent, the book still manages to promote the princes as possibly worthy future leaders.