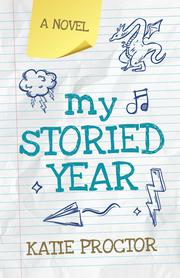 A middle schooler experiences the transformative power of writing.

Life holds little promise for Dragon. At school, he struggles to keep up. Home isn’t much better. His mother’s diabetes prevents her from working, so there’s hardly anything to eat and their trailer smells like her cigarettes. Worst of all, the events of one terrifying night have left Dragon wounded, raw, and easily triggered. But seventh grade changes everything; several caring adults support him by giving him the tools and space to process his emotions, and he learns he’s not the only kid with dyslexia in his class. Best of all, he finds his writing voice along with the courage to tell his story. Thoughtful pacing provides a foundation for Dragon’s first-person narration, punctuated by short free-verse poems about his hopes and fears. Dragon’s transformation from fly-under-the-radar, struggling student to brave friend and writer is gradual and satisfying, making up for the sudden, less realistic turnabout of his mother from depressed and unresponsive to conscientious and supportive. Dragon’s classmates, though sketchily drawn, are a well-intentioned, ultimately kind group. This story with curricular applications will be a mirror for kids with similar adverse childhood experiences including abuse and abandonment and a reminder to educators that they have great transformative powers. Whiteness is the default for most characters; Dragon’s mostly nonverbal half sister’s father was Latinx.

An honest look at the struggles many young people face at home and at school.