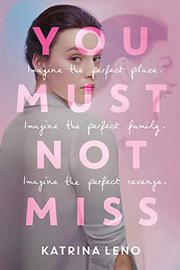 YOU MUST NOT MISS

A depressed New England teen writes her perfect world into reality and uses it to exact revenge.

Sixteen-year-old Margaret “Magpie” Lewis’ father left soon after she caught him having sex with her mother’s sister. Since then, Magpie’s older sister, Eryn, a college senior, has stopped communicating with her, and her mother’s drinking has gotten much worse. In addition, her ex–best friend, Allison, has shunned her and branded her as a slut after a horrid encounter with Allison’s boyfriend, Brandon. School is an afterthought, but Magpie has made new friends: Clare, whose father committed suicide; bisexual Luke; Brianna, who suffered a humiliating incident; and Ben, who is trans. Magpie also copes by writing about a place called Near. After a portal to Near manifests in Magpie’s backyard shed, she spends days there with her Stepford-esque family—one untouched by tragedy—but as Magpie tests her new abilities, her numb, shattered heart tells her that revenge will be sweet, no matter the cost. Poor Magpie’s spiral is a heartbreaking example of how deep pain often masquerades as cruelty, and her actions are tragic. Leno (Summer of Salt, 2018, etc.), channeling early Stephen King at his best, offers no neat conclusions, and her frank examination of depression, grief, alcoholism, and the ruinous aftermath of sexual assault is grim yet effective. Characters are presumed white.

Readers will ponder this exceedingly creepy gut punch of a tale long after turning the last page.