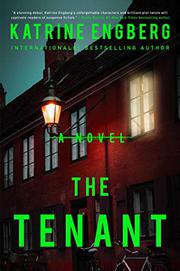 It’s only been about a year since University of Copenhagen professor Esther de Laurenti retired, and she’s been writing a novel, something she’s always dreamed of. When Esther’s tenant, 21-year-old Julie Stender, is murdered, Esther is shocked. Heading up the investigation is Copenhagen detectives Jeppe Kørner and his partner of eight years, Anette Werner, and it’s proving to be a doozy. The murder was particularly heinous: The killer stabbed Julie and carved strange designs into her face and, frustratingly, seems to have been very careful not to leave any physical evidence at the scene. Of course, as investigators start digging into Julie’s life, they discover some suitably shady secrets in her past, and it’s suggested that one of her boyfriends might have felt scorned enough to resort to murder. Perhaps it was her new boyfriend, who is supposedly a much older, sophisticated man. Too bad nobody knows who he is. When Esther reveals that the details of the murder closely mirror her work in progress, it opens a whole new avenue of investigation, and when Esther attempts to draw the killer out, it puts her firmly in the crosshairs. Engberg’s background as a former dancer and choreographer gives a boost to her considerable flair for the dramatic (keep an eye out for a theatrically staged murder at the Royal Danish Theater) and highlights a strong focus on Copenhagen’s creative community; even Jeppe wanted to be a musician before he became a cop. His fairly recent divorce almost ruined him, and Anette’s upbeat and pragmatic style is no small annoyance to her moody partner, which is played for light comic effect (as is Jeppe’s reawakening libido), leavening the heavier subject matter. Overly familiar plot elements keep this from being a standout, and some twists require a significant suspension of disbelief, but Engberg’s fast-paced narrative is bolstered by an interesting and quirky cast as well as an intriguing setting.

A bit over-the-top but still a lot of fun.