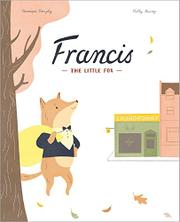 Translated from the French, this tale based on the app Renaud le petit renard perhaps loses something in print.

Francis is a smartly dressed little fox who spends Saturdays with his father at Mr. Li’s Small Socks Laundromat. He likes getting away from his annoying little sister, Lola, but fears Mr. Li’s granddaughter, Lily Rain Boots, who is always playing tricks. He makes lists of things he likes about laundry day (mixing patterns and colors! Sock tossing!), but while he and his dad are out having frozen yogurt, Lily adds lots of extra detergent to their laundry. It makes a huge mess of bubbles and terrifies the laundry cat, whose name is Mouse. Calling for Mouse terrifies the buxom Madame Bernadette, who thinks it’s a real mouse. Lily guiltily cleans up the mess but not before playing one final trick, which involves the beribboned unmentionables of the zaftig Madame Bernadette. And that’s about it, but it takes over 90 pages to get there. The simple shapes in dusty pastels evoke a French or Québecois city in which animals walk upright and dress as nattily as the humans. Mr. Li and Lily are definitely Asian, and Madame Bernadette wears high heels and a heart-shaped neckline.

The tale has a random feel about it, but one might suppose that underpants of any gender are always amusing to the under-7 set.