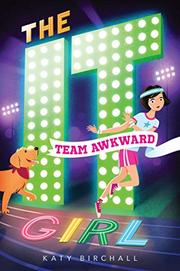 From the It Girl series, volume 2

A viral video makes Anna famous for falling into a potted plant in this sequel to The It Girl (2016).

Although she’s still only 12, she’s also famous because her dad is about to marry the world’s most famous actress, causing the London media to dub Anna an “It Girl,” along with her soon-to-be stepsisters. Unfortunately, she’s a chronic klutz, so embarrassment always looms. She also has a serious and growing crush on Connor, who Anna thinks might be on the verge of kissing her. But Connor is spending a lot of time with Stephanie, working together on a project, causing Anna ever growing worry about his intentions: does he like her, or is she losing him to Stephanie? Things get even more complicated when Anna becomes captain of the always-underdog team for school sports day. With zero sports talent, Anna reluctantly submits to training from the team’s handsome star, causing some gossip. Can Anna overcome her awkwardness and help her team prevail? Can she win Connor’s heart at last? Birchall punctuates the wry comedy with frequent outbreaks of mayhem, as when her dad’s quirky wedding planners release numerous owls inside the house. The British humor should easily cross the pond, where it will find many readers also at an awkward age. Anna’s world is a largely white one.