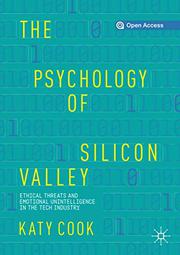 THE PSYCHOLOGY OF SILICON VALLEY

Ethical Threats and Emotional Unintelligence in the Tech Industry

A well-researched evaluation of how the tech industry represents itself as a panacea for all the world’s problems.

In the mid-1960s, William Cannon and Dallis Perry, two psychologists, decided the “two key profile characteristics” of computer programmers were “an interest in solving puzzles and a dislike of or disinterest in people.” And so, a stereotype was born. Cook, who holds a doctorate in clinical, educational, and health psychology from University College London, traces Silicon Valley’s current dysfunctions to its early valorization of logic over social awareness and of analytical skill over emotional intelligence. A fundamental lack of empathy in the tech sector, Cook argues, has allowed Silicon Valley’s most influential players to hoard consumer data and repurpose it as fuel for their hypercapitalist profit machines. Various social problems, she says, can be linked to this economic arrangement, including job displacement, a loneliness epidemic, diminishing privacy rights, housing shortages in the San Francisco area, political polarization, and the controversial Brexit campaign in the United Kingdom. This unique psychology-based approach to the digital economy is a valuable, scholarly achievement. Many other authors have made these same connections over the past few years, but Cook offers a meticulously well-sourced compilation of these critiques. Big tech has held tightly to a prosocial self-conception—so much so, Cook notes, that Facebook’s “move fast and break things” motto takes on a new interpretation: “Moving fast and breaking things in the name of growth has been accomplished to startling effect; unfortunately, what has been broken are communities, trust, and informed discussion, along with the evolution of a new brand of tribalism, which spreads more easily and is more difficult to immobilize.” Ultimately, the author calls for increased regulation, systemic changes, and “values reformation.”

Scholarship, timeliness, and an informed psychological perspective set this book apart from other Silicon Valley critiques.