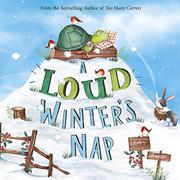 The forest creatures from Too Many Carrots (2016) who were so put out by Rabbit’s foodstuff this time are vexing to Tortoise, who is trying to hibernate.

The opening spread is somnolent and peaceful, picturing Tortoise bedded down on a platform in a tree under a tentlike piece of fabric. A sign reads “DO NOT DISTURB (until Spring).” But close observers will see another sign on the tree and a robin winging toward it. A change in perspective reveals Robin’s plan for a Christmas singing class. Grumpy Tortoise refuses Robin’s offer to join, stating “Tortoises don’t like winter” in what will become a repeated refrain. Packing up, he moves on, but his slumber is interrupted by Rabbit’s carving ice sculptures, and then by Squirrel and Rabbit’s snowball fight, and finally by Beaver’s tree-felling. By this time readers will be ready for the punch line, and Hudson delivers it in spades: Tortoise’s final resting spot is a flat piece of wood at the top of a hill: a sled! And even a winter-hating hibernator cannot help but delight in the downhill ride, which is followed by some sliding on the icy pond with friends. The ending finds all but Tortoise asleep together indoors. Hudson’s detailed and colorful artwork is sure to attract attention, and the animals are cuddly cute with expressive faces, especially Tortoise’s.

Combine this with a nonfiction look at hibernation to round out a winter storytime.