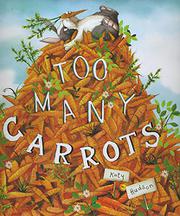 When Rabbit’s unbridled mania for collecting carrots leaves him unable to sleep in his cozy burrow, other animals offer to put him up.

But to Rabbit, their homes are just more storage space for carrots: Tortoise’s overstuffed shell cracks open; the branch breaks beneath Bird’s nest; Squirrel’s tree trunk topples over; and Beaver’s bulging lodge collapses at the first rainstorm. Impelled by guilt and the epiphany that “carrots weren’t for collecting—they were for SHARING!” Rabbit invites his newly homeless friends into his intact, and inexplicably now-roomy, burrow for a crunchy banquet. This could be read (with some effort) as a lightly humorous fable with a happy ending, and Hudson’s depictions of carrot-strewn natural scenes, of Rabbit as a plush bunny, and of the other animals as, at worst, mildly out of sorts support that take. Still, the insistent way Rabbit keeps forcing himself on his friends and the magnitude of the successive disasters may leave even less-reflective readers disturbed. Moreover, as Rabbit is never seen actually eating a carrot, his stockpiling looks a lot like the sort of compulsive hoarding that, in humans, is regarded as a mental illness.

Superficially appealing; much less so upon closer examination.