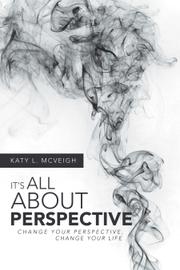 IT'S ALL ABOUT PERSPECTIVE

In this debut self-help book, a writer offers personal anecdotes about self-discovery.

“Some refer to me as a teacher, others call me a shaman, Reiki Master, psychic, seer, empath, energy worker, or healer,” writes McVeigh. But she sees herself as “just Katy,” a woman who has overcome horrendous adversity by changing the way she looks at life. When she was 11 years old, she was raped. But by forgiving her rapist (without excusing his horrendous deed), she managed to free herself from years of mental torture. In this short, easy-to-read guide, the author cobbles together several anecdotes from her life that taught her lessons—for example, after uncovering a suppressed memory, she realized why her mother was emotionally distant. Skimming several weighty topics—such as dream analysis, death, reincarnation, hypnosis, astral projection, and past life regression—the manual cites few sources. McVeigh’s proof relies mostly on her own opinions and life experiences, giving the book a journallike tone. For example, her beginning chapter on dream analysis is inspired by a class she took in college. During hypnosis, she discovered she had committed suicide in a previous life, and this revelation helped her in her present existence. Some of her anecdotes feel like scenes from The X-Files. McVeigh claims to have had an out-of-body experience in which she reached inside her sister’s back and pulled out handfuls of disease or “thick black-tarry-guck.” That’s not the only time the author relates extraordinary events. During a seminar, a beautiful woman wiped “Indian tears” from the author’s face. McVeigh found out that she was a young Native American seer in a past life. Readers who are into subjects like psychic healing or cosmic consciousness will discover a kindred spirit here, especially if they enjoy fanciful life stories. But nonbelievers won’t find the work convincing.

A vivid but meandering guide that tackles several serious subjects.