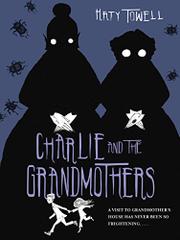 CHARLIE AND THE GRANDMOTHERS

Is it really paranoia if the monsters turn out to be real?

Twelve-year-old Charlie Oughtt’s overactive imagination can supply a frightening or deadly outcome to any situation. His younger sister, Georgie, however, is ready for anything. When children in their gaslit Victorian neighborhood begin to vanish, their widowed mother begins acting strangely and talking of sending them to stay with their grandmother…but both their grandmothers are dead. No matter; off they go. Charlie naturally fears the worst, but Grandmother Opal and Grandmother Pearl’s farm and what lurks beneath it make Charlie’s most terrifying nightmares look like pleasant daydreams. The grandmothers (it turns out there are many of them) separate the children and assign strange tasks and punishments. Then Georgie vanishes…and when Charlie goes looking, he uncovers a terrifying plot. Can Charlie summon the inner courage to save Georgie and the other missing children from a dream-devouring menace that threatens the whole world? Following Skary Childrin and the Carousel of Sorrow (2011), Towell’s sophomore effort is a slow-ish, Gothic-y adventure. The main characters are stock, but the surrounding cast of monsters is satisfyingly creepy, and they are really the point anyway. The eerie line drawings have the effect of a high school literary magazine, but they add to the unsettling atmosphere.

Snicket-lite without the clever wordplay, it’s a ghoulish though not gross thriller.