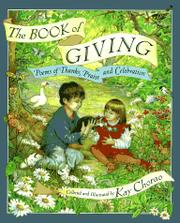 THE BOOK OF GIVING

Poems of Thanks, Praise and Celebration

Chorao (Mother Goose Magic, 1994, etc.) clearly states her intentions for this anthology in her introduction and in the selection of the first two pieces. Overlaid against a phantasmagoric scene of sunshine on water, two poems face each other: James Weldon Johnson's Christian ``Up from the bed of the river'' and the ``Dakota Prairie Hymn.'' Thus the collection, ``created in the hopes of encouraging children to think about giving,'' is to be both pious and inclusive; the tiny figures in that spread's foreground could be either Madonna and the Christ Child or a Native American mother and baby. The scope broadens to include offerings from the Bible, Langston Hughes, Eleanor Farjeon, William Blake, Tu Fu, Rabbi Moshe Hakotun—a divergent religious spectrum for a subject matter and artistic style that are consistently traditional. The predominance of rural scenes may make city children wonder if their surroundings are as praiseworthy. A sentimental and somewhat overwrought collection whose gifts will be best appreciated by browsers. (Picture book/poetry. 3-6)