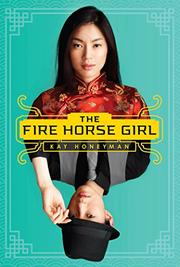 Hoping to escape the curse of being a Fire Horse girl, a Chinese teen emigrates to San Francisco in 1923, where she encounters deceit, disappointment and danger.

Chinese girls born in the year of the Fire Horse are ruled by their fiery temperaments. A Fire Horse girl, 17-year-old Jade Moon’s temper, stubbornness and selfishness ensure that she is scorned and single in her rural village. When handsome, smooth-talking Sterling Promise appears, professing to be her uncle’s adopted son, he convinces Jade Moon and her father to go with him to America to make their fortunes. Wary of but attracted to Sterling Promise, Jade Moon sees this as her chance to begin a new life. Arriving in San Francisco, they are detained in prisonlike barracks on Angel Island—where Jade Moon discovers that her father and Sterling Promise have betrayed her. To avoid returning to China, Jade Moon poses as a man and slips into Chinatown, where she’s ensnared by a gang involved in prostitution. In a defiant first-person voice, Jade Moon describes the desperate lives of Chinese immigrant women as she relies on her Fire Horse persona to save herself. Period details about American anti-Chinese sentiment and the hidden side of Chinatown provide historical context to Jade Moon’s disturbing story.