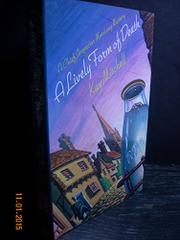 A LIVELY FORM OF DEATH

A sturdy first novel introduces Chief Inspector John Morrissey, whose Malminster bailiwick includes the village of Little Henge, where housecleaner Betty Hartley has just been found dead of cyanide poisoning. Along with being the village's prime gossip, Betty wasn't above filching an occasional pint of milk from seductive blonde Marion Walsh, one of her employers — this time with fatal results. When Marion is found murdered soon after, a succession of lovers and evidence of blackmail provide Morrissey with plenty of suspects—among them Bernard Moxon, whose wife seems to have gone off the deep end, and Jim Goddard, whose sorry fate appears to close the case. Not so—Morrissey is dissatisfied. An unlikely clue sets him digging deeper—until, with some help from teen-aged son Mike (and lagging well behind the reader), he uncovers the true culprit and another dimension to crime in Little Henge. Well-developed characters, nicely woven plot, and smooth writing—all make the author a welcome addition to the English- village police-procedural tradition.