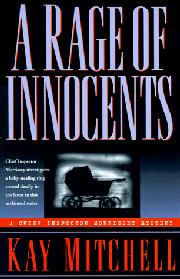 A RAGE OF INNOCENTS

A fifth excursion to England’s Malminster township, the grungy turf of Chief Inspector John Morrissey and his Detective-Sergeant Neil Barrett (A Portion for Foxes, 1995 etc.). Once again, the two are facing some knotty problems. The desiccated remains of a pregnant woman have been found in a drainage ditch—murder, says the coroner’s report. The corpse is eventually identified by Lucy Walton as street waif Mandy Sheard. Feisty, pregnant, 16-year-old Lucy is off the streets now, doing menial work at The Cedars, a maternity nursing home run by the icy Diane Carpenter and connected to Father Donnelly’s shelter at St. Ursala’s church. Then comes the rape of Kim Fitton—a crime that’s just a blip in the vicious life of drifter/odd-job worker Darren Minter, who lives rough in his old white van with the cowering, feckless Skeeter, half admiring (and half scared-to-death of) his savage companion. More compelling for Morrissey than these and other nefarious doings is the botched police action after the rape, a failure that results in rioting, vandalism, and a personal catastrophe that leaves Barrett by himself to track the rapist and nail Mandy’s killer. Both of which he does, uncovering a scam along the way. The tale is told in short takes that move swiftly from scene to scene, and from character to character, with high-level suspense that eases only when the scene turns to the petty rivalries at Police Headquarters. Another winner from one of the genre’s best.