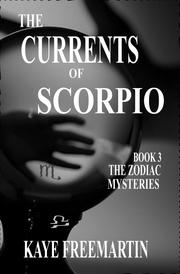 THE CURRENTS OF SCORPIO

The third book in Freemartin’s (The Curse of Capricorn: The Zodiac Mysteries Book 2, 2014, etc.) Zodiac Mysteries series adds some originality to the glut of dystopian novels.
On the surface, the life of young, beautiful artist Brooke Otto seems enviable. She’s married to fabulously wealthy Marius Greenway and lives on his waterfront estate on touristy Triton Isle in the fictional realm of Astrogea, a society dictated by astrology. Their marriage, however, is a loveless one. She still nurses a broken heart from her relationship with Douglas Rubio, and Marius is bewitched by his lover, Ceto Waverly, who lives in The Cove, the island’s only town. Brooke’s despicable mother-in-law, Beryl, resides with them as well, never missing an opportunity to point out Brooke’s shortcomings. Most of all, Brooke is a Cuspian, born on the cusp of two different astrological signs, which, in astrology-ruled Astrogea, makes her a distrusted, reviled outcast. Brooke’s two signs—Libra and Scorpio—are in constant opposition, so much so that she can no longer paint. When a high-ranking politician requests that Brooke paint his official portrait, her problems come to a head, forcing her to learn the truth behind her duality and inability to create beautiful art. In the process, she reveals startling facts about her marriage and discovers whom she can really trust. Starting with the third novel in this series isn’t ideal, since the world of Astrogea can be a bit confusing, but the simple premise makes it easy enough to dive in, particularly because the generally well-written story blossoms with suspense in a beautiful, disturbing setting. Brooke is a likable, sympathetic woman, yet the story’s narrative possibilities aren’t fully developed. Likewise, at novel’s end, the rapidly switching point of view between Brooke and her friend Margo creates some unnecessary confusion, even if it contributes to the tension.
A welcome addition to the realm of dystopian fantasy, adding new twists of its own.