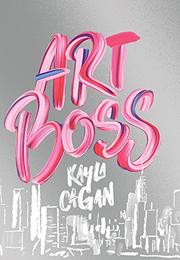 A young artist moves to the big city.

In the follow-up to Piper Perish (2017), Cagan’s plucky first-person narrator has escaped the confines of her distressing home life in Houston to follow her dreams of attending art school and supporting herself as an artist. Moving to New York City with the money she saved waiting tables, talented 18-year-old Piper now finds herself in the rare position of being hired by a celebrated artist to serve as his assistant as she awaits news on the financial aid package she desperately needs to attend art school. Piper is ready to remake herself and start a new life, even as she gets a reality check from native New Yorker Silas, a would-be beau and seeming “real live Edward Gorey character,” who warns her that New York is “a city with no respect for the past. Nostalgia just gets swept up with the trash here.” Trash eventually becomes an important artistic element for Piper as she tries to establish her own autonomy and negotiate budding romantic and artistic relationships in the shadow of the domineering artist who’s hired her to execute his vision. This enjoyable read contains many New York City details that ring true and offers a glimpse into the contemporary world of young struggling artists. Piper and Silas are white.

A fast-paced bildungsroman offering an engaging portrait of the artist as a young woman. (Fiction. 14-18)