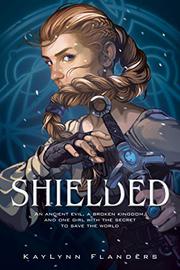 From the Shielded series, volume 1

A princess fights to save her kingdom while trying to conceal her magic.

On the eve of her 17th birthday, Princess Jennesara learns of her betrothal to the prince of Turia, an alliance made by her father to secure the neighboring kingdom’s military support in quelling the fighting at his borders. Before she is sent away to safety in Turia, she learns of other worrying developments brewing at home: A burned letter references a search for the mages’ library, illicit magic is being used in skirmishes at the borders, and there is a potential betrayal within her father’s circle of trust. She frets, too, about her own secret magic being discovered, for only her older brother, Ren, is supposed to possess magic. On their way to Turia, Jenna’s party is ambushed and she narrowly escapes. She is forced to fend for herself and find her own way to Turia to discover who betrayed her family and what secrets lie in the rumored mages’ library. Jenna conceals her identity and ingratiates herself with her betrothed’s family as she eludes the threat of a shadowy, sinister foe. Though overflowing with common fantasy tropes and featuring lengthy expository passages, this series opener nevertheless features affable characters and moves at a solid clip that will keep readers entertained. Jenna’s people are fair-haired while Turians are olive-skinned with dark hair.

May well beguile readers with its mix of magic and political intrigue.