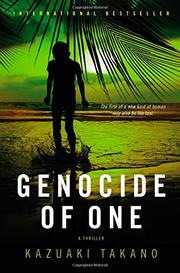 Best-selling Japanese author Takano blends cell-manipulating microbiology and pyscho-cultural social analysis, all while sending four men into the Congo to save the human race.

It’s 2004, and President Gregory S. Burns occupies the Oval Office. War in Afghanistan and Iraq, yes, but the Heisman Report says mankind’s biggest threat is a 3-year-old Kanga Pygmy living in Congo’s Ituri Forest. A random mutation created a quantum leap in the boy’s intelligence, and the report says it could lead to the extinction of humankind, much as Homo sapiens wiped out Neanderthals. Shifting from Washington to Congo to Tokyo, Takano’s narrative zigzags from firefights to power-player conferences to the complex biochemical research required to find a treatment for PAECS—pulmonary alveolar epithelial cell sclerosis. Ex–Special Forces officer Jonathan “Hawk” Yeager quit the Army for big dollar security work to finance his son’s PAECS treatment. Leading Operation Guardian, Yeager believes his team is isolating a viral outbreak, but on the ground, he learns the 40 Kangas with whom the superhuman boy lives are to be assassinated to save the world from his mutation. Anthropologist Nigel Pierce is nurturing the boy, and the child is trying to ensure Yeager won’t kill him by enticing a Tokyo graduate student to formulate a drug to save Yeager’s son. The savant has written GIFT, a program to build and test pharmaceuticals within days rather than years. Japanese racial prejudice gets a rap, but Takano’s villain is the military-industrial complex and the United States’ evolution into Big Brother via Echelon, a program tracking everyone all the time. Takano’s action will appeal to Clancy-philes, but his theme explores how individual psychological frailties shape history, using an administration similar to Bush/Cheney as the bull in the international china shop.

The dense, erudite, multiparagraph lectures on microbiology slow down this better-than-average techno-thriller.