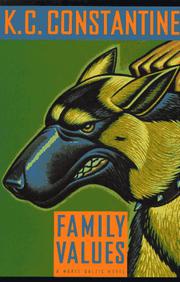 Great news for Mario Balzic's many fans: The retired police chief of Rocksburg, Pa. (Good Sons, 1995, etc.), is back in the saddle again—all except for a little piece of one ear (vide the priceless opening scene). As if in answer to his exasperated wife Ruth's prayers, Balzic is offered a temporary job at $35 an hour working for the Attorney General's office. Citing new evidence, jailhouse lawyer Lester Walin, nÇ Walczinsky, has demanded a post-conviction hearing in re the killing of two druggies 17 years before. The evidence: Hubert Scumacci, the witness who swore that he drove pothead Lester to the fatal rendezvous, now says the shooter was somebody else; and Edgar Patter, a convicted perjurer who helped put Lester away back then, has produced a document that he says proves Lester was in Ohio the night of the murders and can't have seen a thing. Heartened by the promise that these no-account felons will now tell the truth, probably for the first time in their lives, Lester insists that he has an alibi: a set of Polaroid shots he never produced before for reasons the subject of the photos makes grotesquely clear. Investigating this serpentine latest round of claims and counterclaims will take Balzic deep into the heart of one of the most monstrous families in mystery annals. ``Sometimes,'' Balzic concludes, ``you learn things, which the minute you learn `em you wish you hadn't.'' All too true for him, though not for his lucky readers.