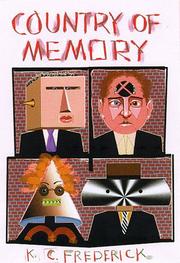 Somewhere in Eastern Europe, somewhere between Kafka and Orwell, a corporate flunky awakens to life and his government’s stranglehold on it—in a bleakly poetic, slow-moving debut by storywriter Frederick. Petir receives a phone call from Eduard, whom he once knew (but not well), asking him to rendezvous in Eduard’s stead with a lover, and for reasons he doesn’t begin to understand, Petir agrees. The woman is fetching but distant, serving to deepen Petir’s dissatisfaction with his lot—that of a divorced, apolitical workaholic. In his confusion, he takes another unfathomable step: he writes personally to one of the pesky claimants whose hopes—whatever they may be—it is really Petir’s job to squelch. For his trouble he receives an eyeless bird’s head and peasant curses from the claimant, Pund, a loner who lost his leg in an accident for which Petir’s company refuses to provide compensation. Then Eduard is killed (in women’s clothing) on the edge of a lawless, teeming refugee encampment outside their city, and Petir realizes that he’ll never be able to return to his former state of blissful ignorance. Pund harasses and assaults him, his ex-wife reenters his life as a lesbian, and Eduard’s lover begins to take an interest in him. Finally, a repressed childhood memory kicks in, and he begins to come to terms with the fact that his mother had sent him out of the house just before she blew it up with his father and herself inside. As the state’s true totalitarian nature grows more apparent every day, and civil unrest intensifies, Petir endures his various other torments, then decides to risk a small but exquisite humanitarian gesture, reaching out to nemesis Pund in an act that redeems them both. A novel with such a full cargo of lonely souls needs more wind in its sails; this one’s becalmed in a Sargasso Sea of introspective flotsam and loose ends.