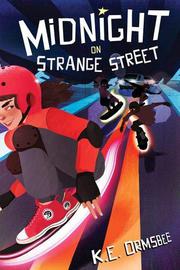 Four kids with inexplicable powers have a close encounter in a near-future Texas.

The Sardines just want to ride their glowboards, hang out in their clubhouse, and be left alone by the class bully. It’s been years since Component G—glow—was discovered in Callaway, and on the coasts the Global War is raging, but Callaway is just a regular American suburb. Regular, that is, except for the Sardines: Dani, Avery, and the twins, Bastian and Lola. The four best friends and passionate glowboarders discover something else they have in common: They can all hear one another’s thoughts and move things with their minds. The telekinesis and telepathy (or, as Dani says, “tele-whatevers”) are scary, but maybe it can help them win the big glowboarding championship! But the Sardines start to receive terrifying messages from outer space. Are aliens coming to destroy the Earth? Faux typescript interludes from the point of view of an unnamed stranger working with the government introduce a different menace, one the kids only slowly become aware of. The Sardines, from a variety of white ethnic backgrounds, need to win the race, escape the government, and prevent the destruction of the Earth. Easy peasy. The setup is so compelling that kids will keep going even though the pace doesn’t always live up to the page count.