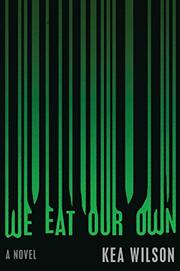 WE EAT OUR OWN

This impressive debut novel chronicles the making of a shlock-schock movie in a South American jungle imbued with all-too-real late-20th-century horrors.

One would have to be a pretty desperate actor to pursue a movie role like the one our nameless young protagonist, referred to throughout in the second person, snatches like an overripe, low-hanging mango sometime in 1979. Leaving his bewildered girlfriend behind in New York, this actor hops a plane to Colombia as a last-minute lead replacement in a jungle cannibalism chiller being slapped together by an enigmatic Italian filmmaker named Ugo Velluto, who's inflamed with the idea of making something more authentically scary than usual. And real life seems to be cooperating with Ugo’s obsession: near an Amazonian shooting locale so remote that it doesn’t have a phone line, there's a cadre of revolutionary guerillas who have entered a Faustian bargain with international drug traffickers. Some of this off-screen nastiness begins to gradually overlap with the graphic grossness being orchestrated by Ugo and his crew. Meanwhile, the actor struggles to find his way—and his character—in a project that's without a script and, seemingly, without clear direction beyond whatever comes to its increasingly erratic director’s mind. Inspired by actual events, Wilson shows impressive command of a narrative that weaves back and forth and back again in both time and locale; much like the viewer of a pseudo-documentary horror movie (ever seen The Blair Witch Project?), you wonder throughout whether you should trust whatever it is you’re told—and jumping to the end won’t help at all. You shouldn’t anyway, because Wilson’s writing style is hypnotic, tightly wound, and harrowingly evocative of the story’s stifling, bug-heavy atmosphere. Even the sunniest skies of this ill-starred shoot are thick with menace and portent.