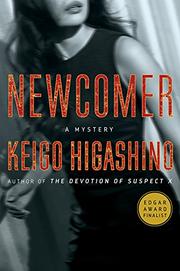 The girl at the rice cracker shop is probably the first to notice Kaga’s novel approach to investigation. Rather than focusing on the crime scene in Kodenmacho where Mineko Mitsui was found strangled in her apartment, Kaga begins by looking at the rhythms of the street. Why do businessmen walking from the Hamacho neighborhood to the Ningyocho subway station still have their jackets on, while the men coming from Ningyocho have them slung over their shoulders? Naho Kamikawa, the shopkeeper’s granddaughter, feigns indifference as she sits sipping her banana juice with Kaga, but still she’s impressed at his perceptiveness. So are Yoriko, owner of a traditional restaurant down the street, and Akifumi, the apprentice at irascible Mr. Terada’s clock shop. As author Higashino describes Kaga’s incursion into the lives he finds at each of the street’s small shops, he seems to be crafting a chain of tiny, gemlike short stories—until the tales start intersecting, scaffolding on one another, and eventually creating a bridge between the lives of the longtime residents of Kodenmacho and the death of a woman who, for her own private reasons, chose to live in this obscure quarter of one of the world’s busiest cities.

Part Sherlock Holmes, part Harry Bosch, Higashino’s hero is a quietly majestic force to be reckoned with. Here’s hoping his demotion continues to bring him to the attention of readers from East to West.