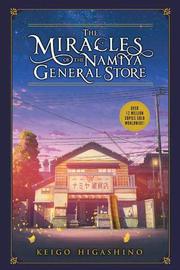 THE MIRACLES OF THE NAMIYA GENERAL STORE

A fantasy novel tells the story of three thieves who inadvertently become advice purveyors after seeking shelter in an abandoned store.

When their car breaks down unexpectedly, three young criminals decide to hide out in a convenience store that has long been out of business. Atsuya, Kohei, and Shota are planning to lie low for a while—at least for the night—but before they can even settle in, an envelope slides through the store’s mail slot. They are immediately suspicious. Who would deliver a missive to a store that hasn’t been open in decades? The letter is from an athlete looking for advice: Should she forgo her Olympic training to take care of her dying boyfriend or push forward to pursue her dream? “As I was struggling on my own with these thoughts, I heard some rumors going around about the Namiya General Store,” she writes. “I know my chances are slim, but I’m writing on the off chance that you might be able to help me figure things out.” The guys discover that the store—when it was in operation—had a reputation for being a place to have questions answered. Kohei, out of boredom, answers the letter and drops it in the mail bin. Almost immediately, he gets a response. The correspondence continues, though the trio can’t tell where the letters are coming from—other than that they seem to be from 30 years in the past. The novel is a bit of a Russian doll, with one layer of narrative opening to reveal the next. Higashino’s (The Name of the Game Is a Kidnapping, 2017, etc.) prose—as translated from the Japanese by Bett (Star, 2019, etc.)—is muscular and concise: “Exiting the station and heading down the street of shops, Kosuke Waku felt an unsettling feeling creep across his chest. He was right. Just as he’d feared, hard times hadn’t spared this town.” More than a time travel mystery, the story is a rather earnest tale of human decision-making, and the author is adept at drawing an emotional response from readers. Inventive and always surprising, this book is easy to get drawn into and difficult to put down.

An endearing tale about a magical correspondence.