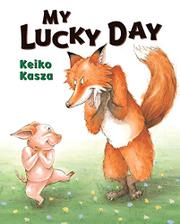 It’s become predictable, this story of the pig outfoxing the fox, but Kasza’s version does sport his lively art and a measure of dry humor. When a piglet comes knocking on Mr. Fox’s door, the fox can’t believe his luck; he’s not used to delivery service. The piglet is just about to be tucked in the oven, when he suggests a few improvements to Mr. Fox. Wouldn’t he taste better if he were washed first—“Just a thought, Mr. Fox”—and plumped up and perhaps massaged to tenderize the meat? The fox agrees that he would, rushing madly about scrubbing, feeding, and working the piglet’s tissues, and promptly falling into an exhausted swoon. The pig is last seen back in his pen, thumbing through his address book—Mr. Bear, Mr. Wolf, Mr. Coyote—getting ready to work the same ruse on another carnivore. Fun enough, though no self-respecting four-year-old will be very worried about this little porker’s fate. (Picture book. 4-7)