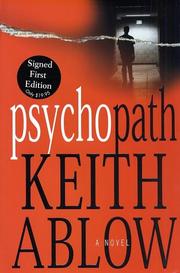 Clevenger was first met in full-blooming Denial (1997), wherein he kept gulping Scotch, bought coke on borrowed money, bought sex at nude dance bars, couldn’t pay his bills, hit up his mother for drug money, gambled, drove drunk, dug S&M. Denial ended with Clevenger still deluded. Compulsion (2002) found him trying to shake his demons while analyzing an infanticide on Nantucket. Ablow, himself a forensic psychologist, now takes a page from Hannibal Lecter: Clevenger this time out faces his mirror image, a demonically brilliant psychiatrist turned serial killer. In the stunning opening scene, Dr. Jonah Wrens drives his BMW along Route 90 outside Rome, New York, playing Mahler’s serene Tenth Symphony, thinking of Scott Fitzgerald’s The Crack-Up, and searching for a highway victim to seduce into soul-warmth before he razors open the victim’s carotids and orgasms while hugging the victim as his or her life ebbs away. Jonah leaves 14 bodies razored across 14 states before the FBI calls in Clevenger for analysis of the killer’s motives and way of working. Jonah is a traveling psychiatrist for kids severely impaired by mental illness and spends about six weeks at each hospital he attends. He’s now at Canaan (Vermont) Memorial’s low-socioeconomic children’s locked psychiatric unit, which has about 25 damaged kids for him to suck dry of their pains, as he does all his highway victims. His fractured mind allows him entry into unthinkable regions and to drug himself with other people’s demons and escape his guilts. Meanwhile, Clevenger has his own problems raising Billy Bishop, his adopted, pot-selling 16-year-old once accused of the Nantucket infanticide. Still, he chooses to flush out the Highway Killer. The New York Times publishes a letter from Jonah asking for Clevenger’s help in a correspondence. While very successful with damaged kids, Jonah via Clevenger strives to free himself from evil. Everyone says it: He’s the nicest guy in the world.

Only Thomas Harris does it more stylishly.