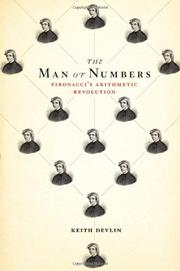 THE MAN OF NUMBERS

Three cheers for Leonardo Pisano, nicknamed Fibonacci, heralded by NPR’s “Math Guy” Devlin (Mathematics Education for a New Era: Video Games as a Medium for Learning, 2011, etc.) as the man who introduced Hindu-Arabic numbers (0 to 9) and rules of arithmetic to Europe in the 13th century.

The author writes that by far the most important contribution that Pisano native made to Western culture was not the Fibonacci numbers (the series in which each term is the sum of the two previous terms, e.g., 1,1,2,3,5,8,13—celebrated in The Da Vinci Code) but the replacement of Roman numerals with the familiar 10 digits and place notation. That was a boon to merchants and bankers, moneychangers and tax collectors, just when the world was poised for the science and technology discoveries of the Renaissance. It all came about because Pisano’s father, a customs official, took his teenage son with him to North Africa, where the boy learned about the numerical system that Arab traders had brought from India. Devlin makes clear that he was not a passive transmitter of new knowledge but a gifted thinker whose magisterial Liber Abaci (Book of Calculation), published in 1202, and later popularizations, as well as works in algebra and geometry, mark him as one of mathematics’ great minds. As for the series, Pisano wrote that it was known early on to Indian scholars, and he stated it as a problem to determine how many rabbits a fertile pair would produce in a year “when it is the nature of them in a single month to bear another pair. And in the second month those born to bear also.”

A wonderful book for history-of-science buffs that will also amuse math teachers, because the many problems and solutions included are simply medieval versions of the word problems that are the bane of many high-school students.