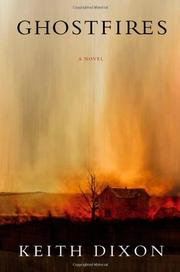 The death of their wife and mother leaves a father and son locked in motionless combat: a grim debut from New York Times editor Dixon.

Once upon a time Warren Bascomb was a respected orthopedist, well-liked by his hospital colleagues and successful by the standards of the outer reaches of New York City. But when his addiction to the painkiller Dilaudid was discovered, he was fired and his medical license suspended, with the coup de grâce supplied by his old medical school friend Ned Strickland, now the hospital’s chief of staff. Ever since, Warren’s soldiered on by renting out the services of his son Ben to a local supplier named Vic, a petty lord who provides in return the fixes he needs. But now the fatal overdose of Warren’s wife, leaving both husband and son sunk in self-justifying recriminations, has unraveled the rickety support network the two men have provided each other. And things soon get worse. Ben owes Vic an impossible sum he refuses to pay and remains deaf to Warren’s pleading; Vic announces in word and deed that he won’t be stalled forever; and the Bascombs circle each other all the while like wolves spoiling for a fight. Despite the obligatory set pieces—scenes of fighting and torture and drug-induced euphoria, capped by a pair of horrific fires—the real action here takes place deep inside the frozen characters, haunted alike by a past they cannot get over and show no sign of having shared. Dixon stokes the fires within them with precise descriptions—Warren sees Ned’s nubile wife Cindi as “every bit the lengthy showgirl of Warren’s grimy teenage fantasies”—and lacerating flickers of conflict like Warren’s brief, doomed encounter with Victor’s main twist Trina, née Abigail, until the exhausting tale doesn’t so much wind up as run down.

Strong stuff if your taste in family values runs to permafrost.