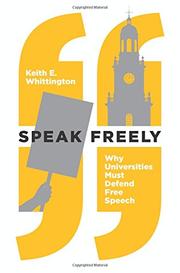 Why Universities Must Defend Free Speech

A timely defense of intellectual debate and critical thinking.

“The ultimate goal of a university community is to foster an environment in which competing perspectives can be laid bare, heard, and assessed,” writes Whittington (Politics/Princeton Univ.; American Political Thought, 2016, etc.) in his cogent—and likely to be controversial—argument for the crucial importance of free speech in academia. A spirited exchange of ideas contributes to the university’s mission “of advancing and disseminating knowledge.” Administrators “cannot be selective in what arguments and perspectives they are willing to let in” and should not give in to any pressure to suppress “forms of expression that they find immoral, embarrassing, offensive, indecent, misguided, or simply unpopular and inconvenient.” Considering students’ demands for safe spaces and trigger warnings, the author acknowledges that in some specifically diagnosed illnesses—PTSD, for example—students can justifiably seek protection from stimuli that might exacerbate symptoms. But in most cases, he has found, students identify as a trigger “anything that happens to remind the individual of a specific past trauma,” and “the insistence on trigger warnings becomes more about the performance of victimhood than a meaningful effort to help actual victims.” Similarly, he concedes that designated spaces where community members find support and affirmation are important, but an academic community as a whole should be a safe space that “emphasizes civility, respect, and acceptance for all members of community.” Citing many recent examples of student protests against speakers such as Charles Murray, at Middlebury; philosopher Peter Singer, at the University of Victoria in Australia; and Milo Yiannopoulos at Berkeley, Whittington argues that obstructionist protesters are not exercising “a protected right to free speech.” Rather, they are shutting down the free exchange of ideas, just as if they were agents of government oppression. The author defends hiring faculty and awarding tenure on the basis of scholarly achievement; “unorthodox, controversial, and even wild-eyed professors” should be valued as “a sign of institutional health.”

In the current divisive political climate, Whittington shows why safeguarding the civil exchange of diverse ideas is an urgent need.