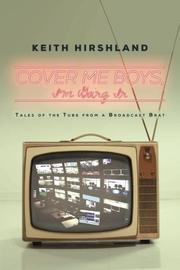 Cover Me Boys, I'm Going In

Hirshland looks back at his 30 years in the broadcasting business, including the births of ESPN2 and The Golf Channel.

Packed with behind-the-scenes information, anecdotes and insight, this memoir offers a firsthand look at sports broadcasting from an industry veteran. Hirshland is a self-proclaimed “broadcast brat”: his father was co-owner of the third local station in Reno, Nev., KTVN Channel 2. As children, Hirshland and his brothers watched hours of soap operas—instead of their favorite shows—so they could help their father by keeping the station’s official commercial logs. The author began his career in television at 19, filming local high school games with a Super 8 camera, learning his trade at various stations and, later, as a producer with Ohlmeyer Communications and on ESPN2’s SportsNight. Finally, he helped launch an ambitious new venture called The Golf Channel: “Never before had a television network devoted exclusively to one sport been conceptualized, funded, staffed, programmed, and sold.” Golf, he explains, is especially challenging to cover: Most sports have “one ball (or puck)…[but] golf features not one, but as many as seventy-eight balls.” Although Hirshland sometimes includes a bit too much detail, readers learn the nuts and bolts of TV sports productions while also getting his insights on the personalities in front of and behind the cameras. He acknowledges Keith Olbermann, for example, as “smart, clever, and funny” but also calls him “a contrary, sometimes petulant perfectionist with an ‘I’m better than you’ attitude.” Golfer Lee Trevino, he writes, was a particularly difficult interview: “ ‘How much are you going to pay me?’ he’d ask, only somewhat facetiously. ‘I’m the top dog out here and you want me to bark for free?’ ” Overall, Hirshland comes across as admirably hardworking and dedicated, feeling lucky to do what he loves.

An engaging memoir by a true TV sports insider.

TOP OF THE ROCK
by Warren Littlefield
Nonfiction