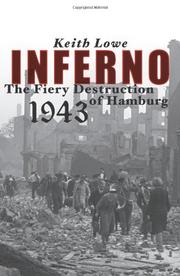 The Fiery Destruction of Hamburg, 1943

A thoroughgoing history of the Allied bombing campaign that leveled a great German city—but did little damage to the Nazi war machine.

“I have very little problem with the fact that Hamburg was bombed,” writes history editor and novelist Lowe (New Free Chocolate Sex, 2005, etc.). The city was, he writes, a center of war-related manufacture, a place where U-boats and aircraft were produced in great number. Yet the historically anglophilic city, a center of resistance to Nazi rule early on, had to be sacrificed: At that stage of the war, bombing German cities, Lowe argues, was the one way the Western allies had to show the long-suffering Russians that they were doing anything meaningful against their common enemy—and, at the same time, diverted resources from the Russian Front. Moreover, Hamburg was a victim of a British leadership schooled in the trenches in WWI, convinced that bombing enemy civilians was not such a bad thing given the morale-reducing effects this could have on their loved ones in the military. The head of the British air command, “Butcher” Harris, selected two advance targets, the seaport cities of Lübeck and Rostock, because “their crowded wooden buildings were highly flammable, and would provide a perfect opportunity for Harris to test his belief that incendiaries, rather than high explosive, were the most efficient means of destroying a city.” They were indeed, and Harris hurled wave after wave of bombers against the heavily defended city, raining a hell of fire and killing nearly 45,000 civilians in a week and leaving another million homeless. Describing this carnage in gruesome detail, Lowe reckons that this apocalyptic attack on Hamburg was “more akin to the annihilation that would soon become possible in the nuclear age” than to anything that passed as conventional bombing at the time.

A worthy companion to Frederick Taylor’s Dresden (2004), shedding new light on a neglected chapter of the air war in Europe.